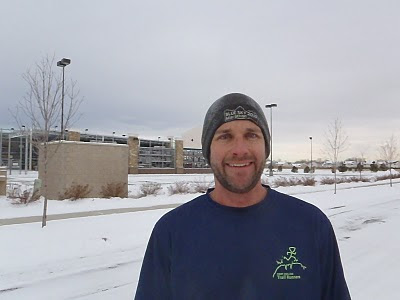 My year began this morning with a cold, snowy and fun 5K hosted by the Runner's Roost out at Front Range Village. It was 7 degrees at the start and the 5K loop course was mostly covered in packed snow. I knew these weren't the conditions for a fast race, so I decided to just go out, run hard and have fun. Steve C. gave a quick welcome and race briefing and blew the New Year noise maker to signal the start. The parking lot in front of the store was especially icy, so I took off pretty carefully. We took a right turn to exit the back of the parking lot and enter the neighborhood and I counted 5 guys ahead of me. Just after the first mile marker I moved passed 3 of them and I could see the first and second runners (#2 being Ryan Burch) widening the gap ahead of me. I felt great and continued to push thinking about how nice it would be to finish my first race of the year with a 3rd place overall. The course took a right turn out of the neighborhood up on to the dry sidewalk heading east on Horsetooth then another right on Ziegler. Ean was cheering and taking photos at 2.5 miles and as I made the right back in to the neighborhood I could hear several runners right behind me. I was starting to feel it at this point at being back on the snowy streets was slowing me down. I focused on staying relaxed and pushing to hold on to 3rd. We took a left back on to the path leading in to Front Range Village for the final tenth to the finish. I could hear another runner right behind me so I pushed with all I could muster while being careful not to slide out on the turns. I held on for a 3rd place finish with a time of 20:41. It was a fun race and even though my time was unimpressive, it felt good to run hard and feel somewhat competitive. Being able to push a steady pace for a 5K helped build my confidence in my prospects of running some faster races this year.
Posted by Alex at 3:54 AM