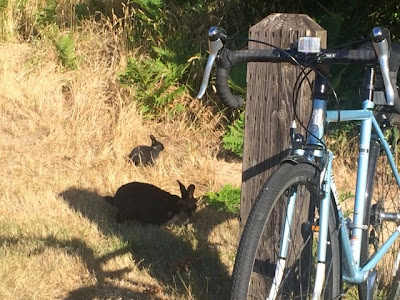 Day 6 - We rode on from our lunch stop in Cannon Beach another 20 miles and stopped for groceries in Manzanita. We set up camp in Nehalem State Park at our first hiker/biker site of the trip. We met Jason and Roman, brothers ~30 years old and 13 years old who are cycling down the coast together on a tandem from Astoria to Crescent City. We shared a picnic table with Rod who had ridden with friend to the Oregon coast from Virginia and would be finishing his 72 day 4500 mile journey the next day in Astoria.
We walked down to the beach to see the sunset and were amazed by the wide expanse of perfect sandy beach (a 7 mile stretch, we were told).  Back at camp, we made a good dinner of cheesy rice which we enjoyed with some fresh veggies we had picked up at the market and a loaf of bread from the Cannon Beach bakery. We all slept well that night.
In the morning of Day 7, Mari and I woke early for a run on the beach before a breakfast of coffee and oatmeal and then back on the bikes to return to 101 and continue south. We rode in to the Tillamook Cheese Factory for lunch and ice cream and cheese samples and made contact with my friends Ed and Victoria to discuss plans to meet up for dinner. 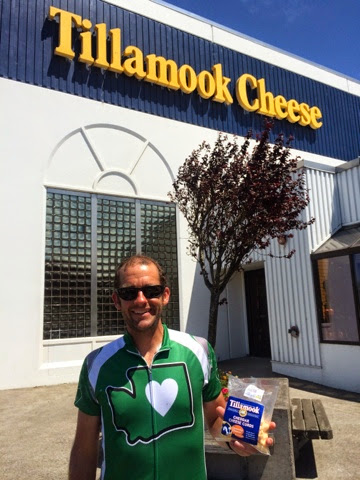 They were driving home to Hillsboro (just west of Portland) from Crescent City, CA and were taking the coastal route to see us. We decided to adjust our camping plans from Cape Lookout State Park to Webb County Park in Pacific City, which turned out to be across the street from Pelican Pub and Brewery, recommended as a good place to stop by Steph from her Portland to San Francisco ride a few years ago. It was a good choice. The last 15 miles of the ride included a giant climb
into a socked-in point above Cape Lookout. The sun came out as we dropped down the other side to Sand Lake road and into Pacific City.  55 miles for the day and 2000+ feet of vertical.  The county park had 10 tent sites and a hot shower and was right next to a Laundromat where we washed our stinky bike clothes for the first time on the trip. The camp hosts explained that 10 years ago someone had dropped off some bunnies at the camp and they have been doing what bunnies do ever since, so the campground was hopping with rabbits of all sizes. The little girls camped next to us brought carrots and told us that they come to camp at the "bunny beach" several times a year and it is their favorite. 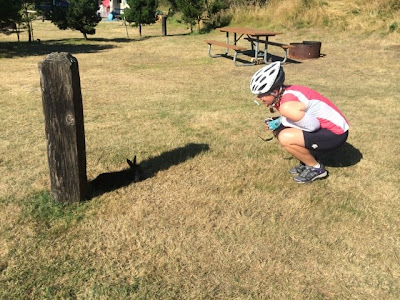 Nora's sister Jill drove out from Portland to camp with us and bike and camp with us the next day. Ed and Victoria and their beautiful 14 month old twins Sylvia and Skye met us at the brewery for dinner and it was great to talk and laugh and catch up. 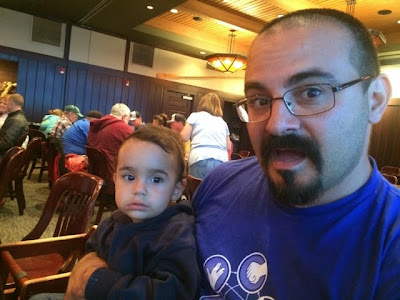 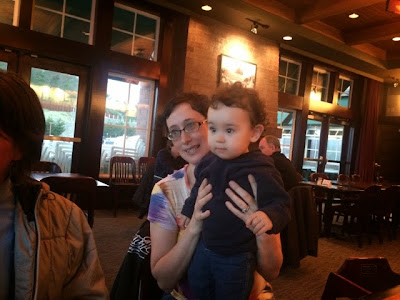 Day 8 began with a beautiful bunny-filled morning with fresh blueberries and Voodoo doughnuts that Jill had brought from Portland. Our extra miles the day before meant a shorter day, which was good because it was our windiest day yet with a couple more good climbs along the scenic Three Capes portion of the bike route. We had a very windy, sandy lunch on the beach in Lincoln City and then continued on with one more climb over Cape Foulweather. The book warned of a big climb and 60+ mph winds but as we braced ourselves for it at wayside lookout, a nice woman pointed out spouting gray whales and told us about a protected one lane road that bypassed the climb with spectacular views of the coast. We took this route and were very thankful for the tip. Our campsite at Beverly Beach State Park was just a few miles further along and it was protected from the wind by beautiful tall pines and tucked away next to a quiet creek. 42 miles for the day. We took a walk down to the beach and then roasted hot dogs and vegan pups on the campfire. It was fun to share our adventure for a day with Jill who decided to ride back to her car in Pacific City instead of taking the bus as she had originally planned. 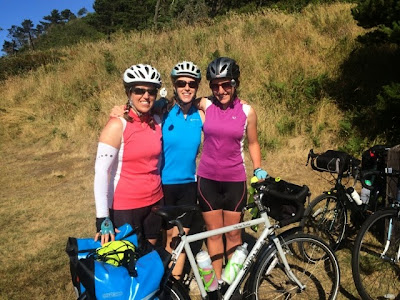 Day 9- We rode out from Beverly Beach, said our farewells to Jill and turned south while Jill headed north. We turned off of 101 and traveled parallel to the highway through the pleasant seaside town of Newport. After Newport we had nearly 30 miles of windy coast before we stopped for lunch in the small fishing town of Yachats. We were all feeling really hungry and enjoyed a hearty meal of fresh salmon and slumgullion (clam chowder with shrimp and cheese!). After lunch we rode up to the entrance of the seal caves for a rest stop. We decided not to pay $14 each to ride the elevator down into the caves, but we tasted the fudge and enjoyed a little protection from the wind. Next we had a long ride down into Florence where we picked up groceries, wine and stove fuel for the next couple days at a well-stocked Fred Meyer. Back on the highway for the final 6 miles to the campground, we were waved over by a friend of Mari's who was on a road trip with his family and had been following our travels on FB. We had a fun roadside visit with Hakim; then continued on to Jessie M. Honeyman State Park. This is another one of Oregon's beautiful state parks with a really nice Hiker/Biker site and friendly rangers and hosts. The campground is in the woods on the edge of a vast expanse of sand dunes that stretch 47 miles along the coast from Florence to Coos Bay.  We paid for two nights at the Hiker/Biker site ($30) and set up camp with the relaxed knowledge that the next morning we had nowhere to go and nothing to do except relax and enjoy the park. 62 miles. 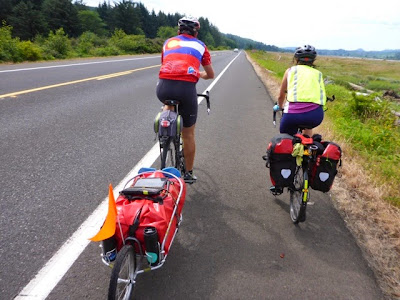 We had a nice night on day 2 camping on the Hood Canal at Potlatch State Beach after 70+ miles of cycling. 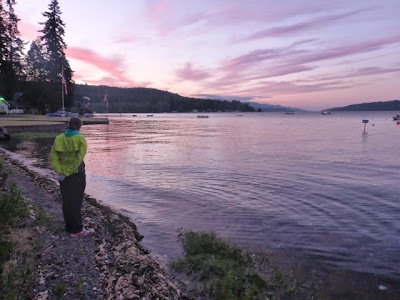 Day 3 was a long tough stretch of cycling through mountains, forests and the towns of McCleary, Elma and (very congested) Aberdeen. At the end of the day, we had pedaled 80 miles of back roads, hilly passes and freeway. We arrived at our camping spot at Twin Harbors State Beach after 6:00 pm tired and sore. We showered and slept well and set out on the 4th with a shorter ride to Bush Pioneer County Park. 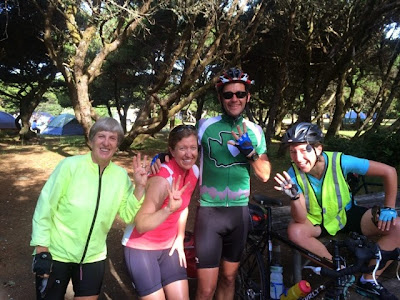 It was a very nice ride without too much traffic and some nice views of the coast. We had lunch in Raymond with fresh Rainier cherries from a road side stand. 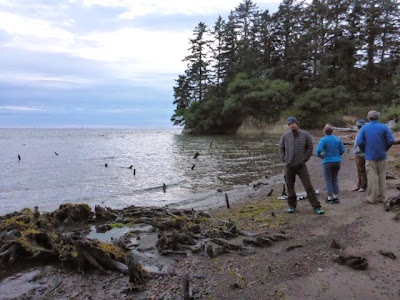 We celebrated the 4th of July in the small-town feel of Bay Center, which appears to revolve around oyster farming. Splurged on picnic food - roasted hot dogs & veggie burgers over the fire and then enjoyed several informal fireworks displays all around us. It's interesting to spend the 4th in an area of reservations where firework stands were abundant. We lit some sparklers and teeny tiny fireworks at the beach. We somehow fell asleep amongst the thunderous booms late into the night. 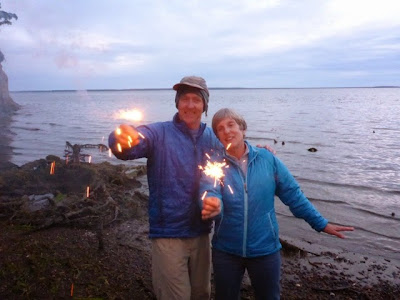 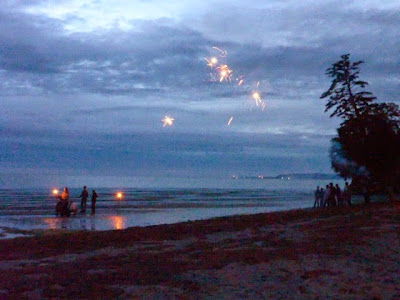 Yesterday, we rode across the harrowing 4-mile Astoria Bridge over the Columbia River and into Oregon! 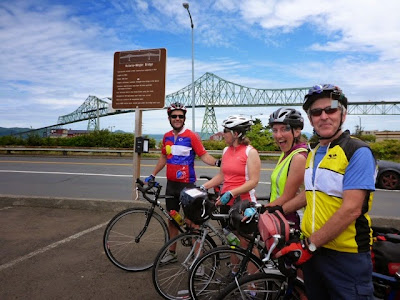 Celebrated the state crossing with a delicious spread and beers at Fort George Brewery in the seaside town of Astoria. 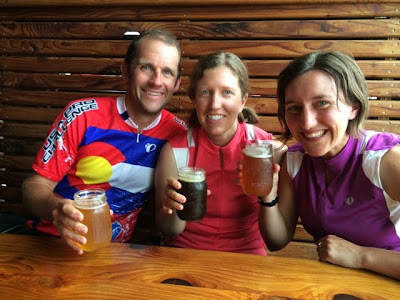 After lunch, a short ride took us to our camp spot at Fort Stevens State Park, a sprawling and very crowded site for holiday campers. We squeezed our 3 tiny tents between RVs and full set-ups (our neighbors had a mini fridge & TV)! A brief walk along the bike paths helped to stretch the legs and we ended at a beautiful sandy beach - site of a 1906 shipwreck. 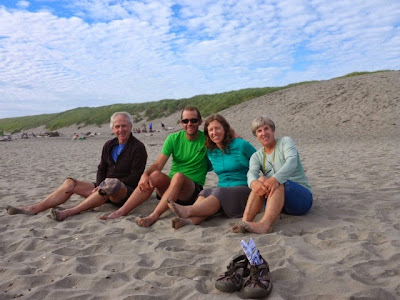 Besides swarms of thirsty mosquitoes, it was a nice last evening with Bill & Ann before we parted ways this morning. We're on our own... 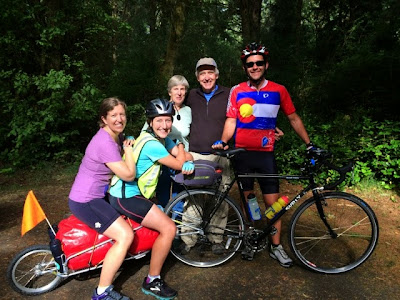 Our ride so far today took us through the beachy resort town of Seaside where we stopped for coffee and a scone. 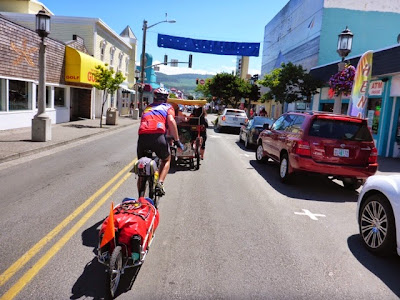 We are now having a leisurely lunch in Cannon Beach on a perfect summer day on the Oregon Coast. 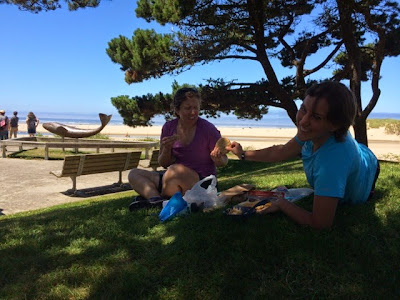 Only 20 or so miles to go this afternoon to our camping spot at Nehalem State Beach. We've decided that biking down the coast is a pretty good life. 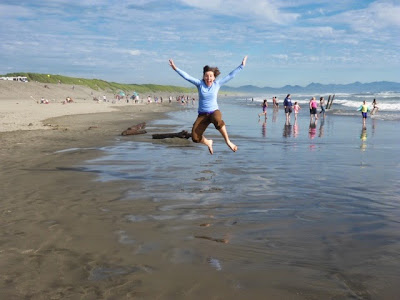 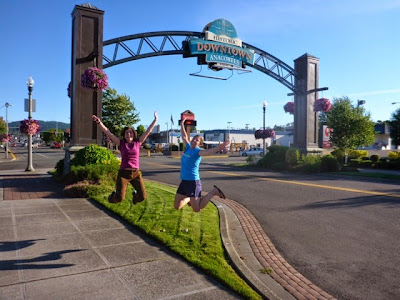 We biked up Nora's parents' (Bill and Ann) driveway in Anacortes yesterday morning and began our 1700 mile journey down the coast.  Nora, Mari, Bill and I rode south off of Fidalgo Island and across Deception Pass Bridge to Whidbey Island. 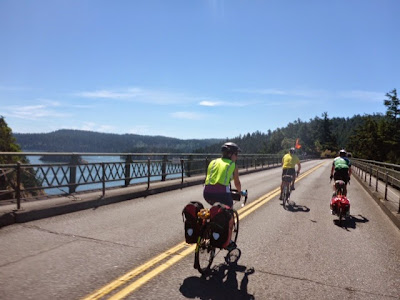 We stopped for lunch in Oak Harbor and met up with Ann who had followed us in the car. After lunch Bill took the car and Ann joined us for the remainder of the ride to the Port Townsend ferry. We pulled into the dock just in time to board the ferry across the Sound to PT. 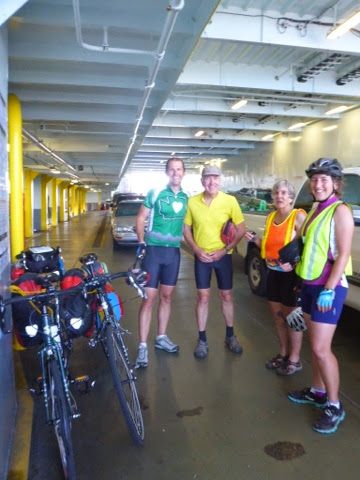 It was a beautiful sunny and unusually warm day in the Pacific Northwest and the 34 miles we rode made for a great start to the trip. 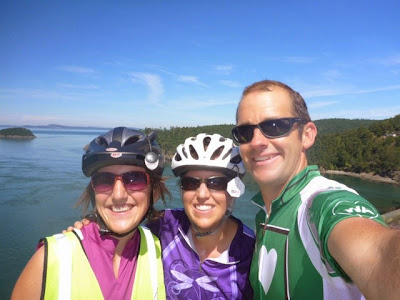 In Port Townsend we stayed with Nora's sister Shelly and her husband Jeff and their enthusiastic 5 year old son, Soren. 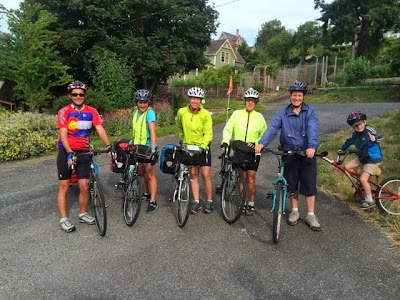 We had a wonderful dinner and visit with the Randalls and enjoyed a good night of sleep- our last in a bed for a while. This morning we set off at 8:30 after oatmeal

and fresh berries and Shelly and Soren rode with us for the first 9 miles on the Larry Scott trail. Our destination tonight is Potlatch State Park after 64 miles of rolling treed roads. We are stopped for lunch in Quilcene where Bill met us with doughnuts and lunch. 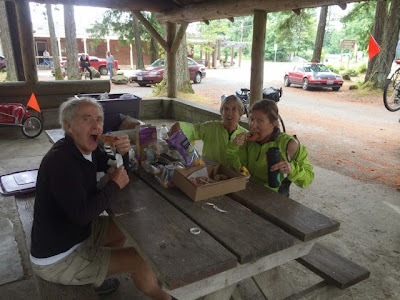 It's cloudy and much cooler today, which is welcome relief from yesterday's sun that left us all a little fried :-(. So far I am loving the pace and routine of bike touring. Many adventures to come... 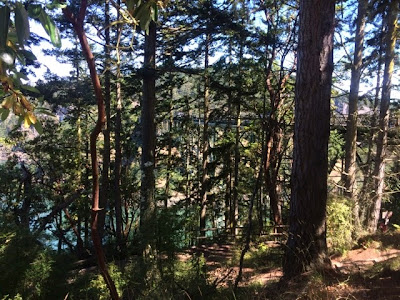 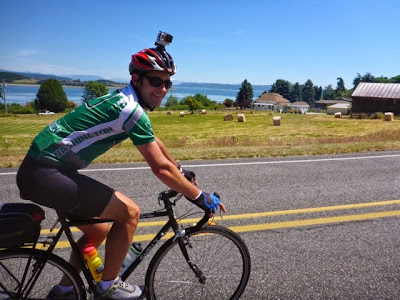