Never fear, the March Madenss run is on for this Sunday, 3/24, as planned.  Due to the Galena Fire in Lory last week and the closure of the state park, we'll have to make some adjustrments to the route.  The run will start and finish at my house and we can still run up County Rd 38E to Horsetooth Mountain Park and then there are lots of options.  My plan is to run to Soderberg and up Towers to Stout, Falls, Rock trail to the Summit, Westridge, Spring Creek, Stout, Towers back to Soderberg then back out 38E to Centennial and out to the top of the "A" Trail, down through Maxwell, Pineridge and then home.  I have no idea how many miles or the vertical, but it will be a good run and if you're looking for more, there are all kinds of possibilities in Horsetooth or down Blue Sky or out on the Foothills Trail or whatever else you can come up with.  Just make sure you're back at my place in the afternoon in time to enjoy some BBQ and beer.  The weather for Sunday looks cold, which is hard to imagine as I sit here in Tucson where it is 90 degrees, so dress accordingly.  There will not be any support on the trail, so carry the water and food that you need.  Send me an email if you have any questions or post comments here to let others know your route and start time plans.  And remember fires and cold weather can't stop the Madness or trail running in the spring.  See you on Sunday!
Posted by Alex at 6:59 AM No comments: 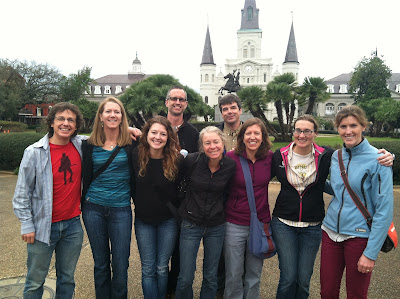 I signed up for the New Orleans Rock 'n Roll Marathon last June on National Running Day.  Good friends Scott and Celeste had announced they were going and I'd always wanted to visit New Orleans so I embraced my newly found freedom that enabled me to decide to fly off to Louisiana the following February without asking for anybody's permission and signed up.  I had been running well and breaking all my PRs so a fast marathon at sea level seemed like an easy thing.  I put down an expected finish time of 2:50 (my PR is 3:03).  The race was 9 months and thousands of miles away and I had bigger more immediate things to think about, so I filed NOLA away as something fun to look forward to way off.

Well, life went on and February came with a trip to New Orleans with 10 wonderful friends from Colorado.  We flew south on Friday morning leaving fresh snow and single digit temperatures for the warmth and humidity of the Big Easy.  We arrived at the rental house to meet Brent who had told us "No need for a deposit, just bring cash," so we were a little nervous, but it all worked out fine and the house had a lot of character and was located conveniently less than a mile from the race start in the French Quarter, just a block from Bourbon St.  In explaining the house and the neighborhood, Brent gave us the friendly advice, "When you go out the front door, go left to party.  Go right and you'll get killed."  We always went left. 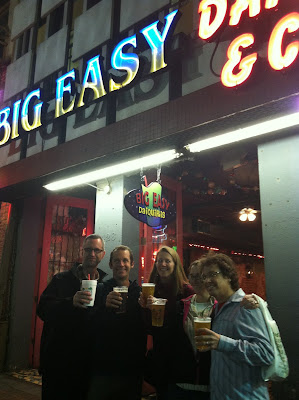 New Orleans is a pretty amazing place.  In modern homogenized America where there is the same Barnes and Noble/Starbucks/Taco Bell/Walmart on every corner, New Orleans is completely different.  In some ways, it feels like being in a different country.  There is a different culture, different rules (bars never close and you can walk the streets with open containers of alcohol), different smells, and a different climate.  On Saturday, we walked down to Cafe du Monde for chicory coffee and fresh beignets.  We wandered the French Market and I got some real gator jerkey to bring home for Micah.  Later Justin took us to Audoban Park for nice run and then we went to a great little Greek restaurant for lunch.  We ate in and tried to get to sleep early on Saturday night (not so easy when there is a party going all night just accross the street at Club Tango). 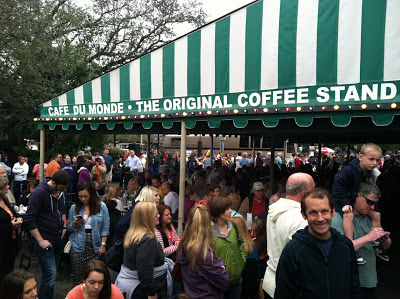 Sunday morning we were up early and finding our way through the morning cleanup routine (that includes sweeper trucks that spray Febreeze) to the race start.  I lined up in corral 1 with Cat, Scott, Justin, Kerri, and Eddie and waited for the gun.  Back in June I had predicted a sub 3 hour finish, but I stood at the starting line knowing that I was maybe in shape to run 3:15 if I had a very good day and ran smart.  Running smart meant not going out hard and trying to hang with Scott and Justin who both had faster goals and better conditioning.  The gun fired and I took off with the pack and focused on staying relaxed.  It was a beautiful cool and sunny morning and I ffelt pretty good.  I ran on my own for those first miles, but Cat and Scott were in sight not far ahead.  Justin was already gone.  My splits for the first miles were all 7:10 +/- a few seconds and I felt in control and relaxed.  At about mile 5, I met up with Cat and watched as Scott faded off in to the distance ahead.  Cat and I ran together for the next 13 miles and had a nice time talking about Western States plans for June and her very full ultra racing and pacing schedule for 2013 and beyond.  We ran pretty consistant splits of 7:08-7:11.  There was a 7:20-something somewhere in there when we ate and a 6:59 at mile 10.  We ran throught the 13.1 mile mark at 1:34 and we rolled along well.  At mile 16, we went over a bridge and much to my surprise (since I hadn't looked at a course map) Lake Ponchatrain opened up ahead of us.  This section was rolling and windy and the late race fatigue was setting in.  Cat and I got separated here and I had to really start to focus to maintain the pace.  At this point I knew that if I could keep the pace under 7:30, I could finish in 3:10 so why not go for it.  As I approached the turn around I saw Justin and then Scott running the other way.  They both looked good and we exchanged cheers and encouragements for a strong finish.  I was glad to make the turn around at mile 19 and know that I was heading back toward the park and the finish line.  I saw Cat not far behind me, running well.  There was a bit of a tail wind for the run back along the lake, but it did little to relieve the late race fatigue that was starting to hit me hard.  I kept pushing along and kept the pace under 7:30 and thought about the mental toughness training benefit that this would have for the ultras coming up on my race calendar.  After the turn away from the lake there was just 4 miles to go and it really took all I had to keep going.  The final mile in to the park to the finish line was much longer than I thought it should be and I crossed the line in 3:10:01 (chip time).  Justin and Scott were at the line waiting and Nora and the rest of the gang were cheering near by.  Cat finished just behind me less than a minute off her marathon PR and took 2nd in her age group.  Scott had finished 5 minutes earlier hitting his prerace prediction exactly and Justin took the race of the day title with a first time road marathon of 2:59:41!!!  Awesome.  Nora had also had a great race with a 5 minute half-marathon PR of 1:47!  Good runs all around. 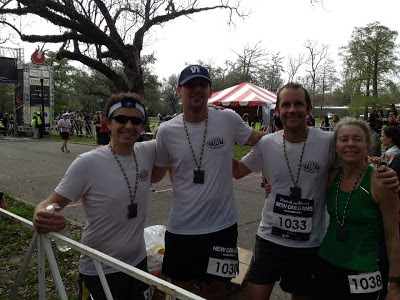 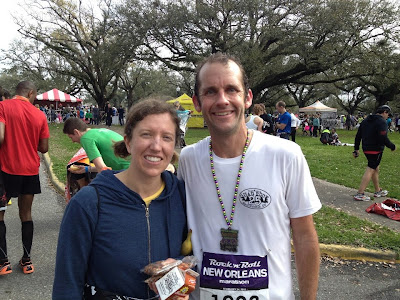 We hung out at the finished and cheered in the rest of the gang before we took the trolley back to the house to clean-up and eat to prepare for one last night on the town in New Orleans.  Our night included a lot of rain, dessert, a jazz show and Preservation Hall and some crawfish pie.  Some of the gang contiued on from there, but Nora and I opted to head back to the house and get some sleep before our early departure Monday back to snowy Colorado.

If you're looking for a fun destination race in February, I would reccomend NOLA and I'd say don't miss the beignets and always go left.
Posted by Alex at 5:48 AM 2 comments: 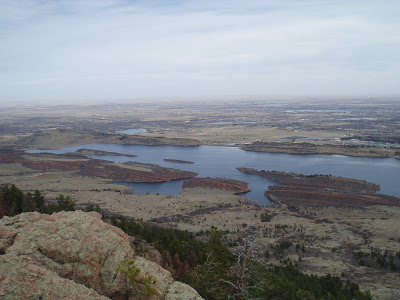 The 3rd Annual March Madness run, potluck and celebration of Spring will be held this year on Sunday March 24.  Course options (9, 23 and 34 miles), start times (7:00, 8:00, and 9:00am) and food/BBQ plans (bring something to BBQ or a sidedish or drinks to share) will be the same as last year.  Check out much of that info here.  There is one minor (or maybe major) change and that is the start/finish line and BBQ/potluck location.  All of that has moved to my house which is across the street and two houses down from the previous location.  Send me an email if you need directions.  I will post some more info in the coming weeks.  I hope to see many of you there.  Invite your friends, challenge yourself, come out and enjoy a spring day of running the trails and sharing good food with some of the best people around.
Posted by Alex at 1:19 AM 1 comment: