The first month of 2012 has raced by before I have had a chance to settle on my running goals for the year.  I think I have pretty much worked those out and I will post them soon, but let's look back at the year so far.

January 1: Ran the New Year's Day 5K at the Runner's Roost in a Colorado PR time of 19:27.  I stopped looking at my watch after the first mile and thought it was going to end up being a slow day so I was surprised to see the clock still in the low 19s as I headed in to the finish.  Good start to the year.

January 7: Snowy Range 20K Snowshoe Race in Laramie, WY.  Race ended up being closer to 26K than 20 with 2500+ feet of climbing and a high point over 10,000 feet.  I had a tough time with my snowshoes at the start and my shins tightened up really bad, but once I got all that worked out I was able to run okay.  The lack of snow meant the course had a fair amount of packed, very runnable trail, but there was also plenty of deep trudging powder. The last couple miles were tough, but it was a fun day and I was happy to finish 4th (out of 8) just behind Sam, Kyle and Regan Driver.

January 14:  Ran the HT Reservoir Circumnav. with Nick, Pete and Sarah.  First long run (22 miles) of the year.  Nice day and a good run.  The gang picked up the pace over the last 7 miles along the east side of the res. and dropped me pretty quick.  I slogged down Maxwell, through Pineridge and back to the house tired but not totally wasted.

January 21: Sourdough 30K snowshoe race:  This was my 3rd year running this well organized, fun and free race on the trails above Nederland.  Two years ago with packed snow conditions, I finished in 4:23 for 2nd place overall.  Last year the snow was deeper and I had a bad start and a big blood sugar crash in the final 3rd and finished in a painful 5:30.  Reports a few days before this year's race showed packed trails and a fast course.  I was shooting for a 4 hour finish.  Then on Friday night, Nederland got close to 10" of fresh powder and on race morning the wind was blowing 50 mph+.  All bets were off.  I felt pretty good starting out and ran steady (but not very fast to the Brainard Lake Road), then somehow missed the turn to the aid station and ended up heading up the road a ways until some hikers pointed out that the parking lot where the aid station was was the other way.  Oh well I only lost 5 minutes or so here.  The upper loop was tough with some deep snow and the big climb, but I pushed though holding my pace and position pretty well.  After going back through the aid station at mile 13, I crashed pretty hard, presumably from low blood sugar.  I ate what I could and trudged on for 4 miles or so until I finally bounced back with a mile and a half to go and ran it in.  Finished in 5:28.  It was a tough day, but I keep telling myself there has to be some training benefit to struggling through deep snow up and down hills for 5 and half hours.

January 22: Blue Sky Trail TH to Devil's Backbone TH and back with Ean -19 miles.  This was a wonderful way to celebrate the 100th day of my running streak.  We got a late start and it looked like it was going to be windy, cold and miserable, but it ended up being perfect.  Ean was strong and full of who-hoos despite this being her first run over 12 miles since November.

January 25:  Pineridge/Maxwell Hill to Reservoir with timed Maxwell downhill mile.  It was a beautiful afternoon with the temperature hitting 62!  I left school soon after the bell and then headed out for a nice run through Pineridge in to Maxwell and up to the high point above the reservoir.  I ran the mile back down the hill toward the stadium steady, trying to stay relaxed on the rocky sections and was pleasantly surprised to see the 7:14 split at the bottom- my previous best was 7:25.  This little PR was a nice boost after a couple of weeks of feeling very slow.

January 29: Frost Giant 5K/10K double in Estes Park- I ran this double last year and had so much fun I decided to do it again.  Even better, Ean, Nick, Pete, Scott and Sarah all made the trip up to Estes for the double too.  Ean and I got up there with plenty of time to run the 5K course as warm up and then hide from the wind in the car until the race started.  I felt pretty good in the 5K and ran it 40 seconds faster than last year.  Between the races, we jogged a couple miles to stay loose and then lined up for the 10K.  I took the 10K out pretty easy, going through the hilly first mile in almost 8 minutes.  The next couple miles went well, but when I hit the long lumpy cross country section that make up miles 4 and 5, I settled in to a comfortable cruising pace.  I picked it up for the final paved mile down to the finish, but still finished 30 seconds slower than last year.  I ran back up the course to meet Ean and run with her to the finish and then we jogged a couple more cool down miles together.  Nick, Sarah, Scott and Pete all picked up hardware at the awards and then we headed over to the Estes Park Brewery for some food and our free race bib beers.  Definitely a  fun day in the mountains.

This was a good month of running with a lot of ups and downs both physically and emotionally.  I am still struggling with heel/ankle/foot pain.  5 sessions with Terry at CoPTS helped and gave me some exercises and a better understanding of the issue, but I really wish it would just go away.  I am trying to maintain a healthy volume of hills and miles without overdoing it.  Not sure yet if I'm am doing that.

February promises to be a fun month of running events starting with this weekend's FCHPBT and then next weekend it is off to Vail with Ean, Scott, Celeste, Pete, Mindy and the kids for the 1st Teva Winter Mountain Games.  Then the next weekend is Red Hot Moab 55K with half the Fort Collins and Boulder trail running community.  The Saturday after will be my 4th Twin Mountain Trudge in Laramie and this year Ean is going too along with several other brave FCTRs.  Ean and I celebrated the beginning of this great month with a run around the reservoir (Ean's first Horsetooth Circumnav.)  22 miles in just a bit over 5 hours made for a good last long run before Moab.  This was Ean's 2nd longest run ever and it was a great way to celebrate her 99th consecutive day of running. 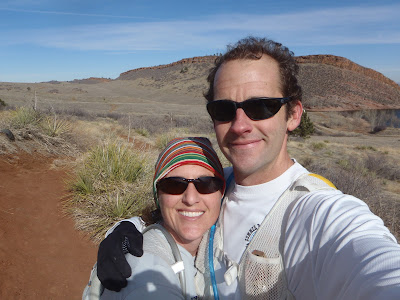