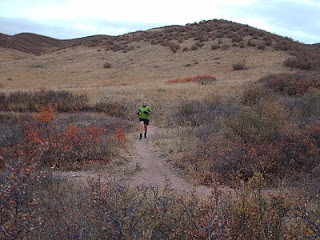 I went for a great run Saturday morning at Soapstone Prairie. This is a Fort Collins Natural Area opened just last year. Ean and I met up with Mary, Jennifer and John and drove 25 miles north of Fort Collins on CR 15 to Soapstone. It was a cold, windy and rainy morning, and we were the only visitors to the trail head. Soapstone borders Red Mountain (Larimer County Open Space) and Big Hole Open Space (Cheyenne, WY). There are 50 miles of trails within the three open spaces making for numerous possibilities for great runs including a 34 mile perimeter loop.

We headed out on a loop to the west on some great trails that rolled along the hillside, through the valley and up and over the ridge. All the trails are smooth, undulating single track that make for great running. The landscape and views were awesome even on this cold, grey fall day.
John and I did a 6-mile loop via the outside of the Mahogany Loop, the Valley Trail and the Towhee Loop. Then we ran back up the Towhee Loop and met up with the rest of the gang and ran the inside of the Towhee Loop and the Mahogany Loop and back the trail head for a total of 12 miles. After some snacks and warmer clothes at the cars, Ean, John and I headed back to Fort Collins while Mary and Jennifer headed out for another 10 miles on the Pronghorn Loop. 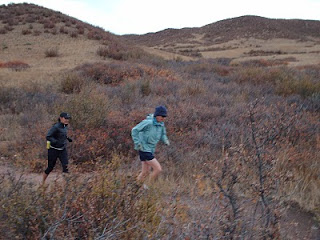 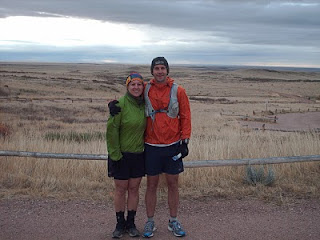 With my last real race of 2010 behind me, I have been thinking lately about my running and racing goals for next year. I'm registered for the Red Hot 50K+ in Moab in February and I will put my name in to the lottery for Western States when it opens next month. I am planning to run the Colorado Marathon in May and finish in under 3 hours.
Another great race option is the new Black Hills 100 in South Dakota put on by Jerry Dunn and friends- the same crew that puts on Lean Horse. Jerry's new race promises to be more challenging and rugged than Lean Horse and very scenic. Jerry is working with Ryan Phillips and Chris Stores to put on this race and they have put together a great web site with videos and the beginnings of an official race soundtrack with original music. The date for the first Black Hills 100 is June 25 which also happens to be the the same day as that other 100 mile race out in California.
Posted by Alex at 10:24 AM No comments: 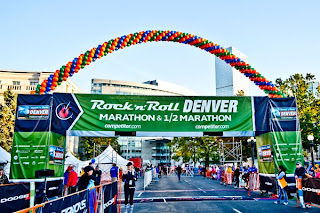 I ran the Denver Rock and Roll Marathon today along with about 14,999 of my closest friends. This was the largest marathon in Colorado history and despite a complete lack of any real marathon training, I was glad to be a part of it.
This was my first road marathon since Boston in April of 2006 and I signed up back in June as a marathon trial run before attempting to go sub 3 at next year's Colorado Marathon here in Fort Collins. I had planned to do some marathon training (tempo runs, track intervals, fast finish long runs, etc) in August and September, but with the late addition of the Lean Horse 100 to my race schedule and the continued troubles with plantar fasciitis, training never happened. I did go out for one easy long run 3 weeks ago and I ran the Crossroads Half a month ago, so I knew I had the fitness to complete the marathon, but no speed to run it fast.
My plan going in to the race was to go out easy at 7:45-8:00 min pace and see how I felt after 15 miles or so. I was prepared to be happy just enjoying the day and running anywhere close to 3:30.
I arrived at the start line by 6:00 am after a 4:15 departure from Fort Collins. I was too relaxed about getting in to the starting corral and missed the wave one start, but thank goodness for timing chips, I started with wave two and set off at a comfortable pace. My first couple of miles were in the 7:30 range and I worried a little about starting off too fast. I felt pretty relaxed and in control and I was really enjoying running through the early morning streets of Denver with the flow of so many runners.
I continued to run 7:25-7:45 miles as we wound through town and all of Denver's major parks. I knew that at mile 15 we would enter Washington Park and continue to run through and around the park until mile 20. I decided to try to just keep my current pace through the park and then I hoped to pick it up at mile 20 and push it in to the finish. I ran 7:30-7:40 all the way through the 5 miles in the park.
At mile 20 I was still feeling pretty good and 6 miles felt very doable. I ran mile 21 in 7:23 and mile 22 in 7:27. Going in to mile 23 I was losing my ability to keep pushing, but with less that 4 miles to go I was confident I could hold on. Mile 23 went off in 7:29. Mile 24 was painful as we went all the way up and over a long overpass and once we got almost down the other side, the course did a U-turn and went back up and over again. This was my slowest mile of the day 7:50. After this, I was ready to be done and pushed on. In the final mile, when I was really starting to drag, I caught up with Aaron Nelson from the trail runners and we pushed each other in to a much better finish than I would have had on my own. I ran hard all the way in for a 3:23:13 and my 4th fastest marathon.
After the race, I ran in to and caught up with several friends who had run the race as well. Kemp, my former neighbor and an all around good guy who unfortunately moved to Lakewood last spring ran a 3:29 which was fast enough to earn him a trip to Boston 2011. Mike Hinterberg ran a 3:03 for his fastest marathon ever by 4 minutes. Aaron held on after a tough run and finished just seconds behind me. Sarah Brown finished her first marathon accomplishing one of her life goals. There were many other Fort Collins friends who ran well in Denver and it was great that in a race of 15,000, I could look around and see so many familiar faces.
Posted by Alex at 10:56 AM 1 comment: 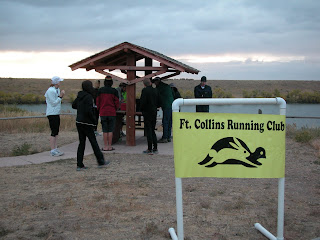 Today was the first race in the Fort Collins Running Club's Tortoise and Hare series. Nick, who organizes these races, and I went out yesterday afternoon to flag the course in Pineridge. It is a 3.75 mile full loop of the Pineridge Natural Area, my backyard and regular running grounds. This morning, Ean, Micah, Maddie, Shadow and I all headed over to Pineridge for the race. The race is free to all FCRC members and includes a breakfast at the Bagel Shop after the run. It was a cloudy, wet, and cool morning and we all quickly realized that we were underdressed. All except for Shadow who was very excited to be out for an adventure and for him the cool temperatures made it even more perfect.
There was a bigger than expected group of runners at the trailhead and Nick was busy getting people registered and calculating the handicapped start. Based on previous T&H race times or a prediced finish time, runners are set out one at a time, with the slowest starting first and the fastest leaving the start line last. Ean, Maddie and Shadow headed out at 8:00 am and Micah, who did not want to run, was put to work as a course marshal. I jogged around to try to stay warm and wished I had brought gloves. I was sent out at 8:19 and took off pretty fast. I went through the first two miles in close to 6:30 each and felt pretty good. I passed a couple of runners that had started ahead of me and got passed by two who had started behind me. When I hit the gentle uphill and single track on the south end of the course, I slowed considerably. I passed Ean, Maddie and Shadow and we exchanged some encouragements. I ran steady, but not very fast along the Timber Trail and hit 7:30 split for mile 3. With less than a mile to go, I tried to push and hoped to pass a few runners that I could see ahead of me. I passed one on the down hill back to the resevoir and one on the stairs back up to the parking lot and finished 21st out of 30 runners. My time was 26:01 and I felt pretty good about it. It gave me some renewed confidence for next Sunday's marathon after a couple weeks of very little running.
I jogged back a short distance and found Ean and Maddie and I took Shadow while the girls had a sprint finish up the stairs to the finish-- Maddie won.
We cleared out fast and nearly filled Rocky Mountain Bagel Works where Nick announced the winners and enjoyed bagels and coffee and time to talk with friends. I talked with JZ about his 50 mile race last weekend where he successfuly ran a qualifying time for the Western States lottery. We also discussed his plans for running the Grand Canyon rim to rim to rim next weekend. This is a run that I have been wanting to do for a while and I wish I could join JZ and Eric Lee next weekend for what sounds like a great adventure. Maybe next time. . .
Posted by Alex at 10:08 AM No comments: