I was very excited (and relieved) after watching some video of the ski portion of the Quad when Nora suggested that we compete as a team in the Pairs Division.  I could bike and run and she would ski and snowshoe.  The perfect solution and so we became the Hesitating Beauties and we were on our way to a one of a kind event in Grants, New Mexico.
The Mt. Taylor Winter Quadrathlon consists of 13 miles of uphill road biking, 5 miles of running up a dirt road, 2 miles of uphill cross country/back-country skiing and a 1 mile snowshoe to the top of 11,301 foot Mt. Taylor and then . . . you do it all again in reverse.  The pairs and teams took off an hour after the solo competitors and we were a smaller group.  It had been a while since I'd competed in a bike race and I hadn't even been on my road bike in months, so I decided to be conservative at the start.  The first couple mile took us through the town of Grants and out on to the road leading up Mt. Taylor.  The top 15-20 riders rode as a pack which I guess was okay.  I was unsure of the etiquette in this race recalling my triathlon days where drafting on the bike was strictly forbidden.  A few of us in the pack talked about this and it seemed no one was really sure so we just rode on taking turns pulling up front.  Once we hit the hill about 4 miles in, the pack started to split up and I was surprised for a while to find myself out front. As the climb steepened and my unconditioned legs tired, I got reeled in and passed (but not dropped) by a few riders. The climb was tough, but the scenery was nice, the sun was warm and it felt good to be out on the bike and hanging in with the lead group. The last 3 miles were pretty steep and I started to look forward to arriving at the transition and getting off the bike to run. I was the 5th rider in from the team/pairs start, quickly found my running shoes, shed my helmet and gloves, grabbed a cup of water and chuck of banana and headed up the road. 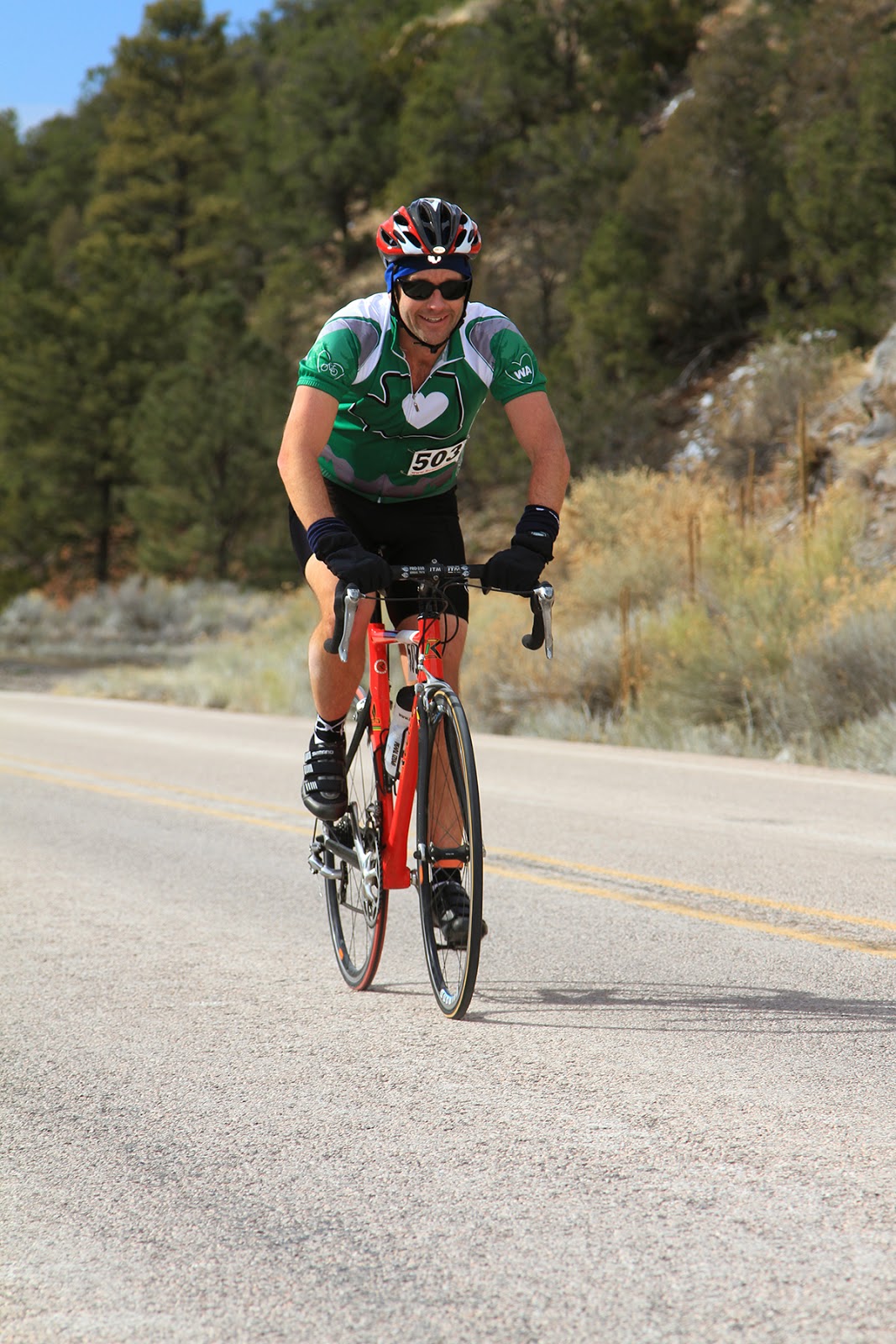 My legs were heavy for the first couple miles, but I loosened up and caught three of the four teams/pairs that had started ahead of me. The run continued up a wide dirt road that turned in to mud, snow and ice in the last two miles. I ran in to the run/ski transition where Nora was waiting and quickly snapped into her skis and headed out on to an icier, steeper and more extreme ski course than anyone was expecting.  ﻿ 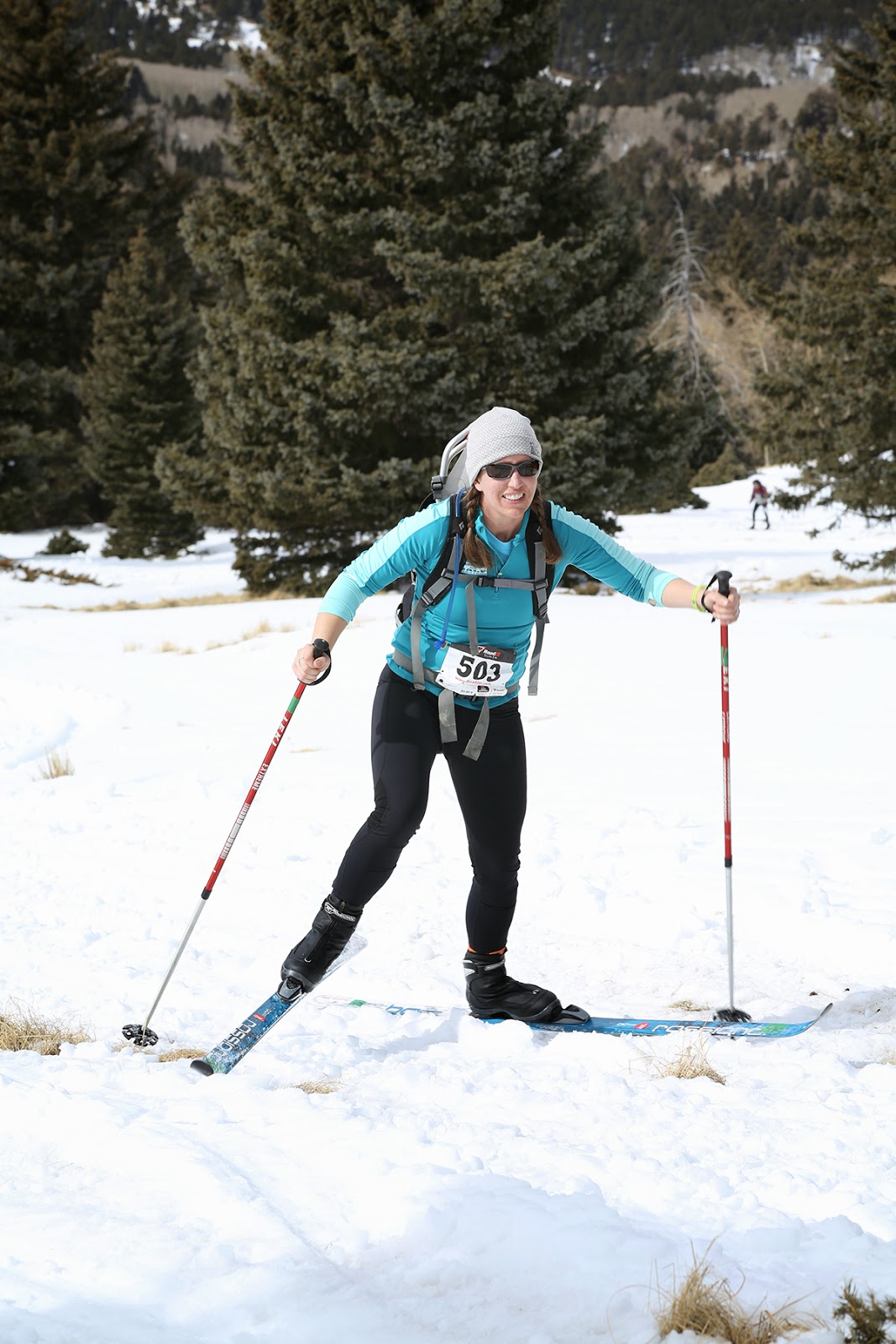 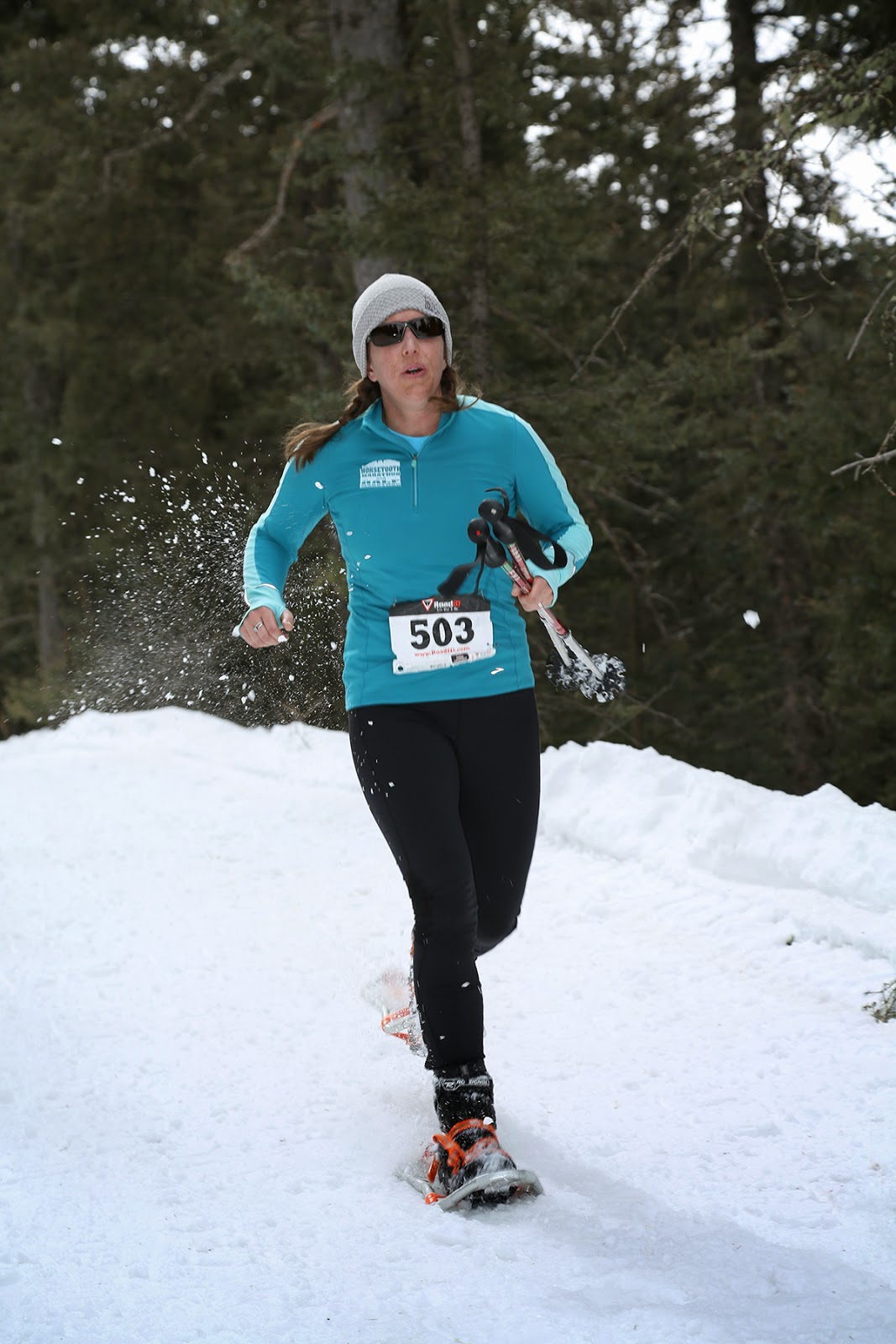 Nora of course took it on like the champion skiier that she is, smiling the whole way. . .  with maybe a couple of falls and some cursing here and there.  After successfully navigating the ski course up, Nora strapped on her snow shoes and raced the last mile to the 11,301 foot summit of Mt. Taylor where she took a moment to enjoy the view before turning around and flying back down the slope to clip back in to her skis.  Downhill skiing is where Nora truely excels and after the race, she modestly shared that she passed 23 other skiers on the downhill.  When she got back to the ski/run transition, I was ready and waiting and took off to run the 5 miles back to my bike.  I was looking forwad to the long down hill bike ride where I could push a big gear, tuck in and fly back to the finish, but I was instead hit with some fierce afternoon headwinds that I fought for most of the 13 miles back down to Grants. 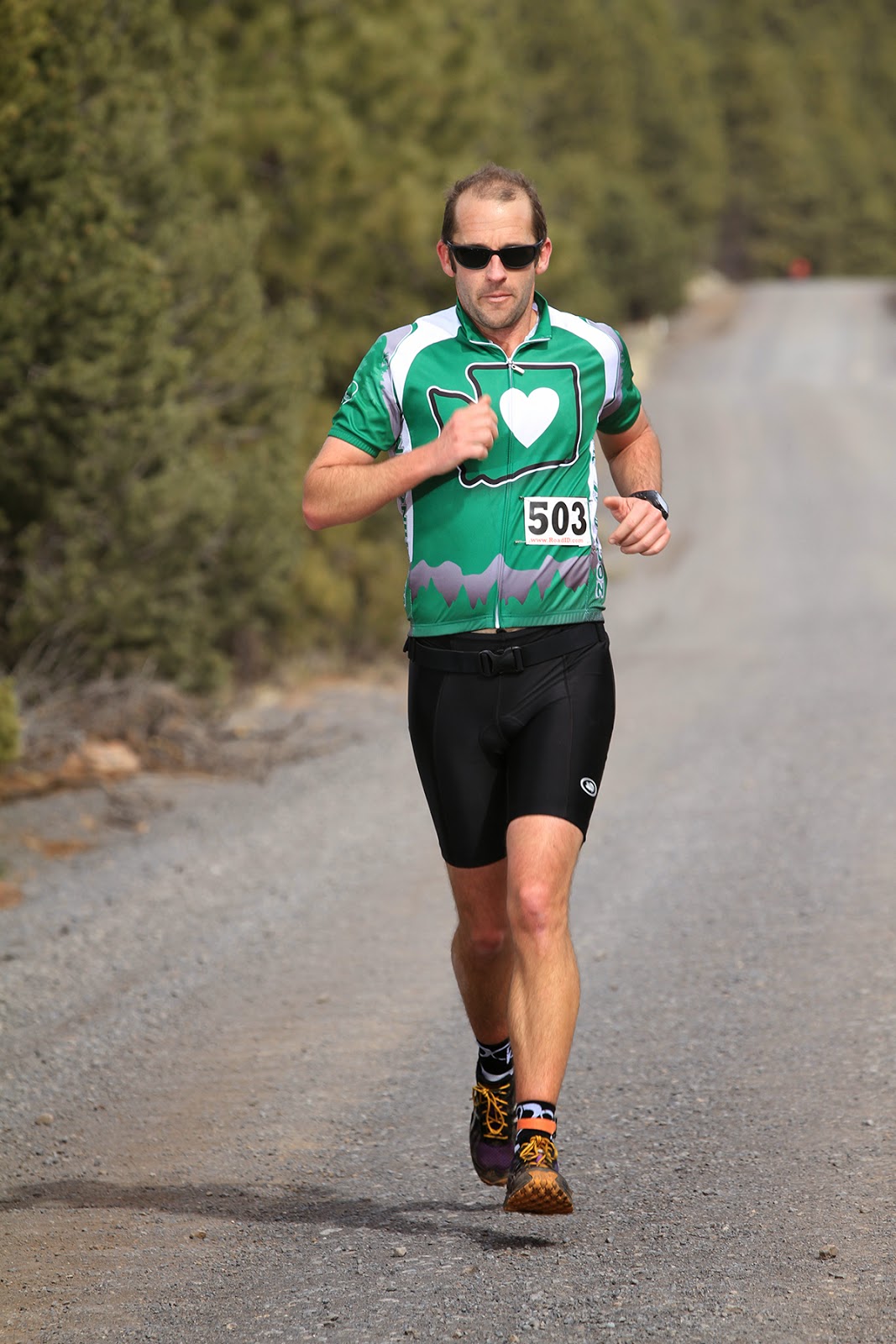 I rolled in to the finish for a combined time of 5 hours 28 minutes which seemed pretty respectable.  I found Mike and Jessica in the beer tent and enjoyed a Santa Fe brewing State Pen Porter while I waited for Nora to get shuttled back to the finish.  When Nora arrived, we watched the finish line for Chris and Steph (the instigator of this whole thing) who showed up all smiles after a long day on the race course. 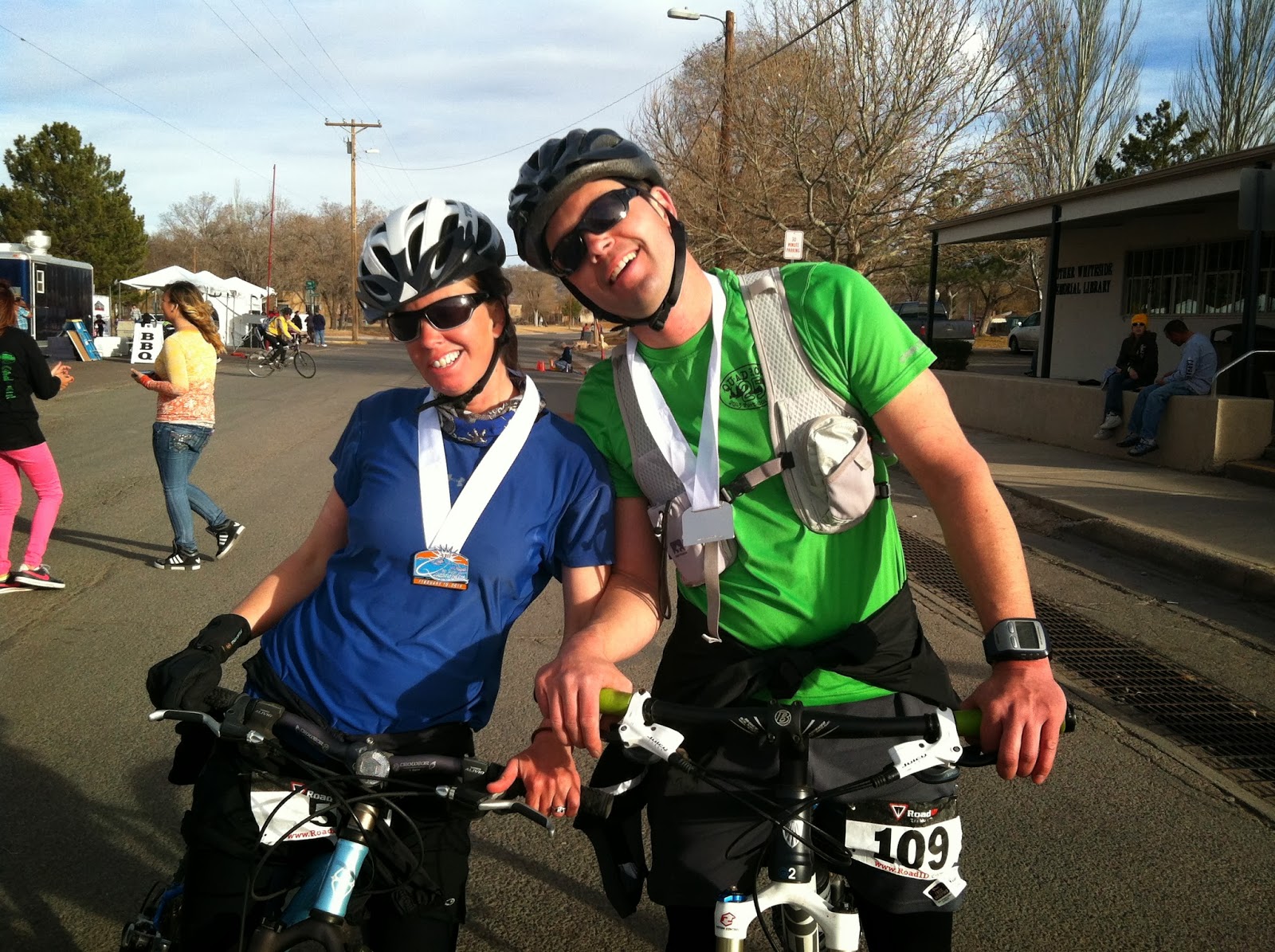 Nora and I checked the results and found that we placed 3rd overall in the pairs division.  We stuck around for the awards and proudly collected our yellow race caps and glass trophies. 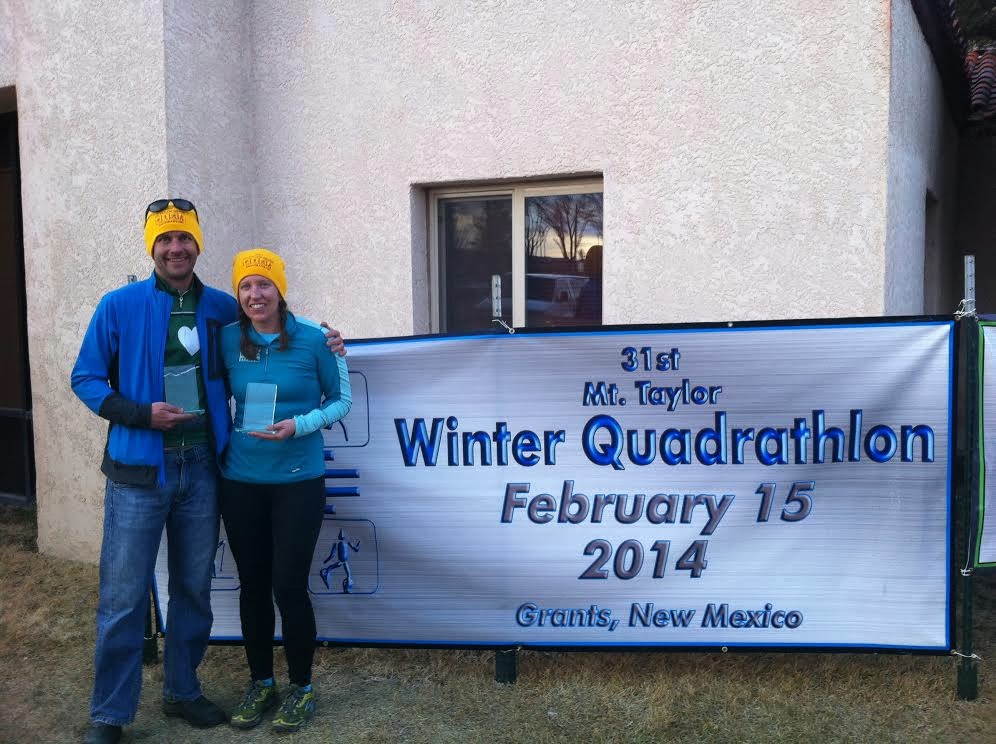 We left Grants victorious and drove two hours to Santa Fe where we showered and enjoyed a delicious Valentine's + 1 dinner at the Blue Corn Cafe.  It was a super fun weekend exploring a new place, competeing in a unique event and hanging out with some good friends.

Winter Running, Snowshoeing, Skiing, and some changes to the plans

I got out last weekend for my first races of the year, first races since Thanksgiving actually, and now my legs are very tired.  I decided on Friday to drop from the 30K snowshoe to the 11.4 mile race which is an out and back on the Sourdough trail just above Nederland.  I have done the 30K race three times, but this year I really didn't feel that I had the fitness. I drove up to Nederland on Saturday morning with Jessie, who was going out for her first snoeshoe race (and her second time out in snowshoes).  When we got to the trailhead at 8:30, it was already sunny and warm and only a little breezy.  Snow condidtions on the trail looked pretty good- packed down and pretty well covered.  I took off at a comfortable and relaxed pace in the back 1/3 of the pack.  I slowly moved my way up keeping the pace very easy.  It was a really beautiful day out on the trails and I was remined of how much I enjoy snowshoeing.  I felt better than I expected to, so as I got close to the turn around at mile 5.7, I decided to count the runners coming back to see what place I was in.  #1 was a good mile ahead of me, then the 2nd, 3rd and 4th runners came along.  #5 was a little further back, probably only a quarter mile ahead and then I hit the turn around in 6th place in 1:20.  I ate a couple fig newtons and filled my water.  The guy behind me that I had passed a little ways back came in to the turn around right after me, and we left at the same time to head back- mostly downhill to the finish.  I tried to stay in the moment running back and just enjoy the time on the trail.  I tend to spend a lot of time (and mental energy) late in a race or long run counting down the distance to the finish.  Today I decided on really trying to just enjoy each moment of the run instead of only thinking about how long it would be before I was done.  I did pretty well with this for a while and vowed to keep running (and living) in the moment as a ongoing goal.  I took a couple of falls on the way back.  Once I caught my front crampon on a root and later the front of my snow show in a deep rut of snow.  Both times I was able to get back up pretty quickly with no damage done besides another tear in my tights.  The forgivingness of snowy trails is another reason I like snowshoeing.  In the final 3/4 mile, I heard another runner closing in behind me and then I saw the guy that had left the turn around with me on the switchback just above.  I was a little frustrated to be getting based in the final mile, but wasn't too worried about it.  I kept running, but moved to the side of the trail to let him pass, but he didn't.  The trail flattened out and opened up and I picked up my pace and opened up a the gap behind me.  With less than a 1/4 mile to go, I saw the 5th place runner ahead (and apparently having some difficulty with a snowshoe, but still having a good time).  I passed him and ran on to the finish in 2 and 1/2 hours for 5th place.  I was awarded with a pair of socks from the raffle (I can always use more socks).  I changed in to dry clothes then hiked back up the trail a bit to run in with Jessie.  I got back home with time to enjoy the last bit of a beautiful warm January day and take an easy bike ride round Fort Collins.
Sunday it was back in to the mountains for the Frost Giant double in Estes Park.  This was my 4th consecutive trip to Estes in January to run a 5K and a 10K in quick succession.  My legs were tired from snowshoeing, but it was another beautiful warm day and there was a big Fort Colling crew in attendance.  I was considerably slower than last year in both races, but I had a good time and felt like maybe all this running and racing would be a good start to getting back in shape.
I decided not to go up to the Snowys this weekend for another snowshoe race and stayed in Fort Collins instead for some good XC skiing around Pineridge with Nora and Shadow. 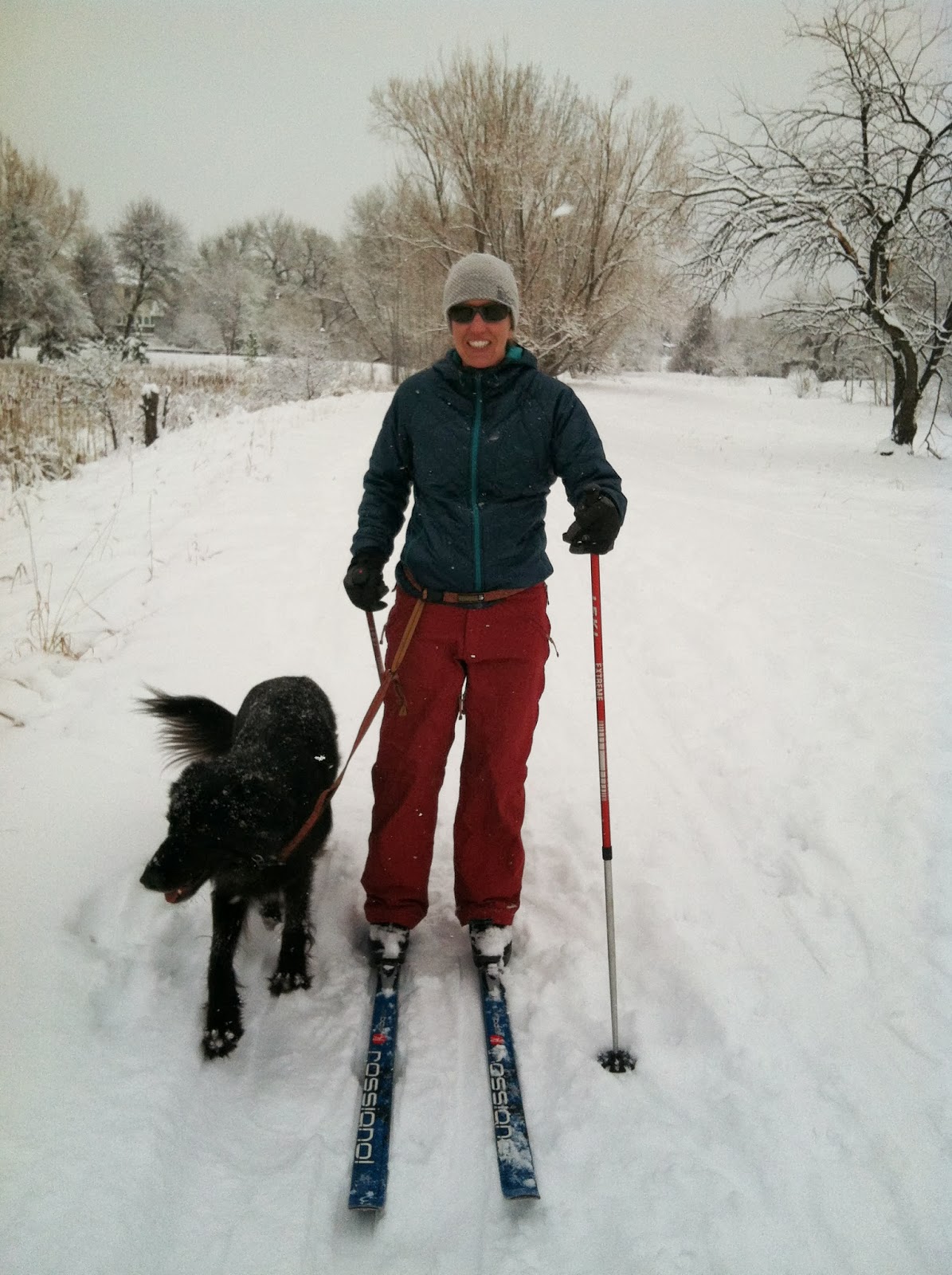 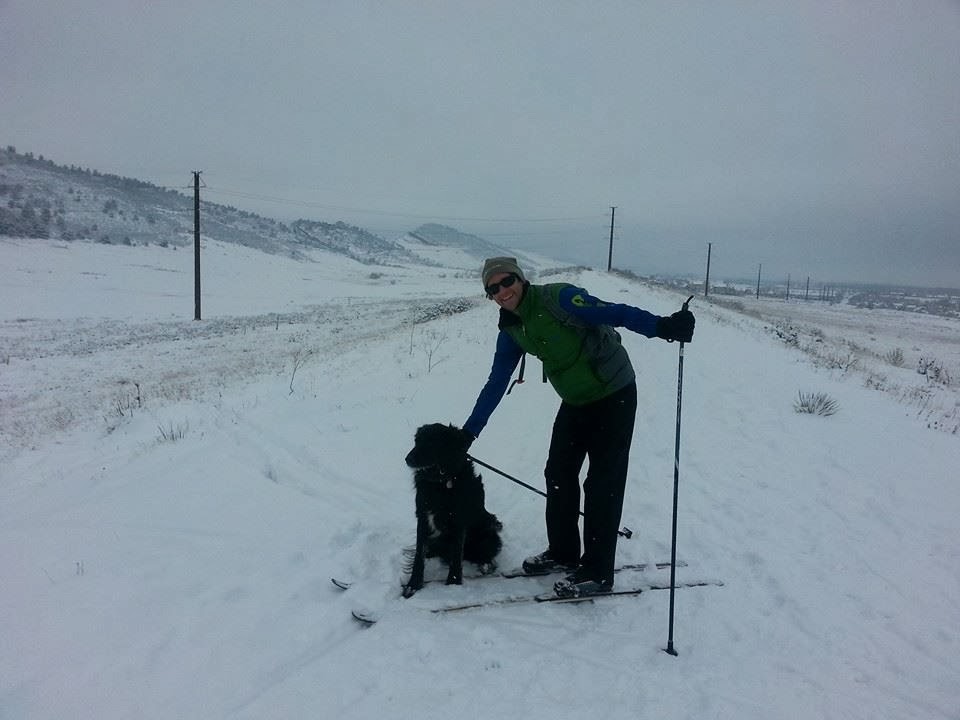 I'm starting to feel a lot better on the skis although I still have a long way to go.  When I realized just how far last week, Nora and I decided to do the Winter Quadrathlon as a team instead.  I will bike and run and Nora will ski and snowshoe.  It will be a lot of fun to compete as a team.
Today Nora and I joined the FCRC at Fossil Creek Park for the 5K Tortoise and Hare Race.  It was 0 degrees at the start and pretty icy on the course, but many of our friends were there enjoying the morning and there were bagels and coffee after. 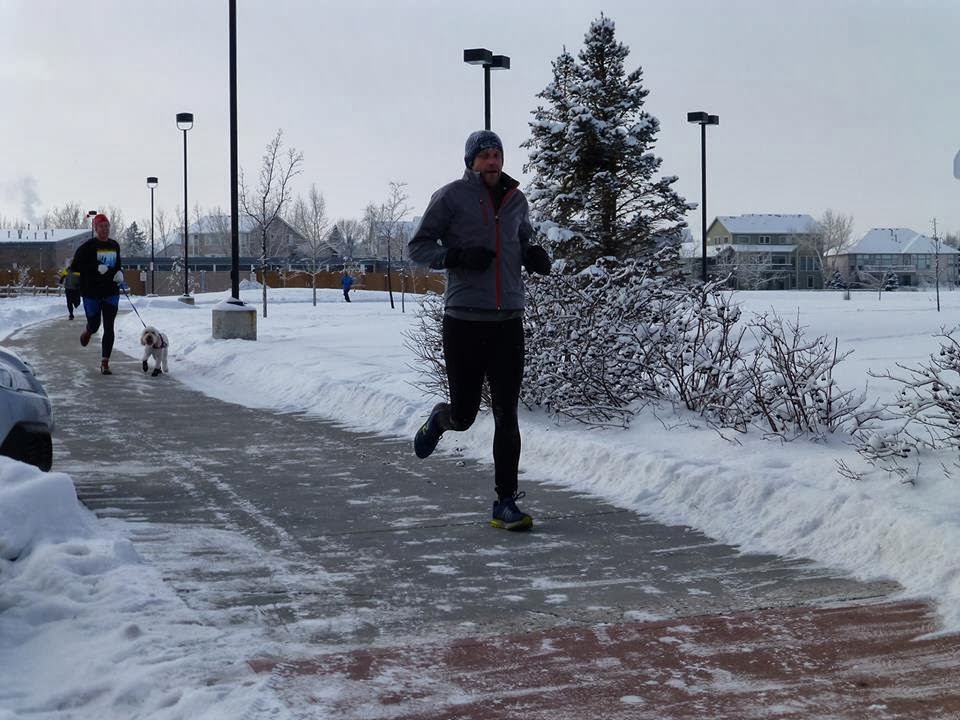 Looking further in to the future, Nora, Mari and I have put together the plans for our day by day route for the bike tour in July.  We'll average around 50 miles/day, do a lot of camping in beautiful places on the coast, stay with friends, and enjoy the journey.